Showing posts from April, 2018
Show All

HANDS ACROSS THE SPECTRUM 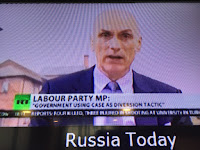 Where Far Left and Far Right Meet
Quiz question, what do the following people and organisations have in common: Nigel Farage, Jeremy Corbyn, Donald Trump, George Galloway, Viktor Orban, Pat Buchanan, Seamus Milne, Leave EU, Stop the War Coalition, Christian Evangelicals and The Morning Star newspaper.*
Answer: They all, at one time or another, have praised or acted as apologists for Vladimir Putin.
Now any list that brackets Nigel Farage, Jeremy Corbyn, The Christian right in the US, and Stop the War in the UK is an unusual list. Or perhaps, I should add, since it is more accurate, would once have seemed an unusual list. However, since we live in strange times the once inconceivable is becoming the norm.  We are witnessing hands stretching across the political divide, from the fascist far right of Britain First and Marine Le Pen to the Trotskyite West haters of Stop the War, all either pay direct homage to Putin or continue to offer an apologia for his violence and thuggery. Since the …
Read more
More posts